Home » COMICS » A History Of Comic Books: Dark And Modern Ages
Every September 25, fans, collectors, readers, and creatives come together to celebrate National Comic Book Day. While comic books have been around since the late 19th century, the comics that we know today have gone through several different iterations and continue to change with the times. In honor of the auspicious day celebrating comics and their creators, I’ll be digging into the history of comic books: the Dark Age and Modern Ages of Comics, which included the rise of the anti-hero and independent publishers, more cohesive storytelling, and the fall of the comic book industry (spoiler: it was able to come back).
Just to be clear, the “Dark Age” of comics isn’t used in the way that most people think of the term. Rather, the Dark Age saw comics and their heroes get grittier, more violent, and more adult. In a way, it almost mirrored the cinematic shift in tone from the late 1970s to 1980s. Simple good and bad morality was out, while more morally ambiguous stories and characters were all the rage.
In my post about the Silver and Bronze Ages of comic books, we ended with the comic book industry going through a revitalization thanks to new writing and illustration talent, a wider variety of characters (non-superheroes), and the rise of more specialized comic book shops. The Dark Age of Comics is widely believed to have started in 1985 with the release of DC’s series Crisis on Infinite Earths. This 12-issue series came out for the 50th anniversary of DC as a comics publisher and it mainly acted as a way to create cohesion between all the different superheroes and their various iterations, as well as connect plot inconsistencies. For example, Green Lantern’s Alan Scott from the 1940s could, in fact, exist alongside Green Lantern’s Hal Jordan from the 1960s thanks to the existence of different Earths. This idea is still popular today (i.e. the CW’s Crisis on Infinite Earths epic crossover episodes) and it paved the way for other comic publishers to create epic crossover series, such as Marvel’s Secret Wars. Ultimately, DC’s Crisis on Infinite Earths was a huge success and probably saved the company from going under. 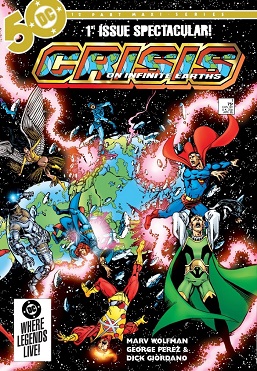 Cover of Crisis on Infinite Earths #1 (April 1985). Art by George Pérez/Image via Wikimedia Commons
The Dark Ages of Comics ended around 1996, but during the mid-1980s to the mid-1990s, readers saw a rise in comics about anti-heroes. Characters such as Venom got their own series and superheroes who had previously been “whiter-than-whitebread” were now depicted as neurotic and tormented; they often resorted to violent methods to cover a whole range of psychological and sexual issues. True to the “dark” part of the Dark Ages of Comics, there was also a rise in dark and pessimistic stories, such as Alan Moore’s Watchmen, Frank Miller’s Batman: The Dark Knight Returns, and the death of a legend in The Death of Superman. While these comics catered to a more mature audience, the major publishers (DC and Marvel, respectively) still wanted to retain their younger fans, so they started to create imprints to cater to both their family-friendly content and their more violent and mature content. For example, DC’s Vertigo Comics reimagined obscure characters from the DCEU in edgier contexts, and Marvel Knights brought back less popular characters and allowed writers more free rein to develop them (Black Panther and Daredevil did exceedingly well in these comics).
The Bronze Age of Comics saw an increase in non-superhero comics and this trend continued with the Dark Age of Comics, with the industry adding more non-fiction works. Art Spiegelman’s autobiographical story Maus was about a Jewish family living through Nazi Germany while in Poland. It ended up winning the Pulitzer Prize and, I would argue, showed that comics and graphic novels (a term that first appeared in the 1960s) could be used as an educational tool (think about how school curriculums now include titles such as Congressman John Lewis’s March, or George Takei’s They Called Us Enemy). 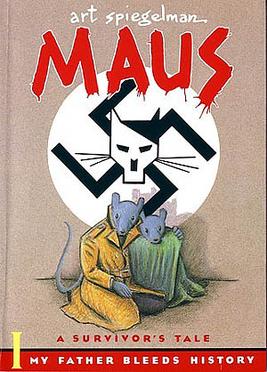 Maus/Image via Pantheon Books
Smaller, independent comic stores had started popping up during the Bronze Age and this brought along a host of independent comic publishing houses too. Many creator-owned companies were started due to arguments between creatives and executives, the most famous of which was Dark Horse Comics (founded in 1986 and still going strong). The benefits of these new publishing companies was that they could specialize in edgier topics and they had more creative freedom over their stories and characters. Hellboy and Sin City both came out of Dark Horse Comics and they were one of the first companies to translate manga for an English-speaking audience.
Sadly, the Dark Ages of Comics was not a great time for female characters. Most were drawn and written in overly sexualized and misogynistic ways. An entire sub-genre of “Bad Girl” comics appeared in the 1990s, which featured female witches, demons, vampires, etc., in stripper-esque outfits. They starred in supernatural stories with borderline pornographic plots and lots of gore.
The Dark Ages of Comics ended with the comics industry entering a huge sales slump and many publishers ended up downsizing. Thanks to a combination of unpopular darker series, unlikeable characters, excess products, and too many collector’s editions and series that didn’t sell, many were struggling to keep afloat and Marvel ultimately declared bankruptcy in 1996.
The Modern Age of Comics is thought to have started with the release of Alex Ross’s Kingdom Come in 1996, which was about a growing conflict between the traditional “out of touch” superheroes of yesteryear and a new, amoral and irresponsible group of vigilantes. Comic book publishers regrouped and brainstormed better business plans and were decidedly pickier about which projects to focus their budgets on. Marvel went through some intense legal battles and struggles to pay back its debt and they were ultimately rescued in 1997 and merged with a company called Toy Biz. They also had to auction off the film rights to some of their characters, (Spider-Man went to Sony, the Hulk went to Paramount and 21st Century Fox bought the rights to Daredevil, the X-Men and Fantastic Four) resulting in some of the messiest deals that are still being worked out to this day. Of course, we all know that Marvel ended up rising out of the ashes. After the success of Iron Man, Disney bought Marvel in 2009 and the rest, as they say, is history. DC has also done quite well, although some might argue that they’re missing the cohesiveness of movies and series that Marvel has perfected. They’ve also brought their popular characters back (as well as some lesser known ones) thanks to the Arrowverse on the CW and the success of movies like Aquaman and Shazam!
Graphic novels, manga, and digital comics have become commonplace have fallen under the umbrella term of “comic books.” Many in the education field are fans of these formats because they allow students to learn about topics in a non-traditional way, something that resonates with a lot of people, especially as we’ve found that there are different ways of learning. In a 2019 analyst report from Milton Griepp, it was found that the market was dominated by graphic novels, Japanese manga, and manga-inspired books, which could also be seen in data about comic shops. Graphic novels accounted for 41% of sell-through at bookstores, and manga is 28%, while books of the superhero genre constituted less than 10%.
If you want to learn a little bit more comic history, check out this video interview with Watchmen artist Dave Gibbons:

Funnily enough, the Dark Ages of Comics is still alive in a way thanks to Hollywood. The popularity of darker superhero movies and series (Christopher Nolan’s 2008 The Dark Knight and the success of the Watchmen movie and the Watchmen on HBO) shows that there’s still an interest in a wide range of styles, plots, and characters. And of course, the success of Marvel movies can’t be ignored, with the total gross estimated in the billions. Comic conventions have also become “it” events, a far cry from their beginnings in the 1970s. Tickets sell out as soon as they’re available and the event draws thousands of fans, cosplayers, and A-list celebrities.
One thing that has been brought to light as of recent is the toxicity of superhero fans. With the rise of social media, fans have more sway than ever on what they think needs to be made available and what they want to see. While it’s important that characters and plots resonate with people, it’s also bought to light just how much influence the public should have. Many industries have had to learn how to navigate and interact with their fans and customers when the internet has allowed everyone to share their opinions and the comic book industry is no different. What’s heartening is that the passion for these characters that have lasted for over a century.
It’s very cool to think how comics first came to be and just how influential and integral to our society they have become. Whether you’ve always been a comic book fan or these posts have piqued your interests, I hope you learned something! Please check out my posts on the Platinum and Gold Ages of Comics and the Silver and Bronze Ages of Comics. This history of comic books: the Dark and Modern Ages is my last post on the topic.
Did I miss anything in my write-up on the history of comic books: the Dark and Modern Ages? Let me know in the comments below!
Featured image via DC Comics


Keilin Huang is a freelance writer that likes the Oxford comma, reading from her neverending pile of books from the library, and Reeses peanut butter cups. She thanks her Dad for introducing her to his Superman comics and probably majored in Journalism because of Lois Lane. Contact her at [email protected]
Marvel Entertainment, LLC the owners of Marvel Comics®, recently licensed Certified Guaranty Company® (CGC®) with rights to create certification labels that will feature some of the most iconic characters of Marvel. Marvel legend characters that […]
Serial Box is a publishing firm that has managed to gain the public’s attention by telling stories in several new ways. The firm is now focusing on telling stories that focus on superheroes with its […]
Certified Guaranty Company, i.e, CGC is a grading company for comics. They announced that Marvel Entertainment LLC has granted it rights to create a lineup of certification labels featuring the most iconic Marvel characters – […]
Comic Years is the go-to source on news, discussion, and community for comics, movies, gaming , anime and TV!
Sign up to our newsletter and receive weekly up-to-date news & monthly amazing giveaways!*