Home » COMICS » A History Of Comic Books: The Platinum And Golden Ages
Every September 25, fans, collectors, readers, and creatives come together to celebrate National Comic Book Day. While comic books have been around since the late 19th century, the comics that we know today have gone through several different iterations and continue to change with the times. In honor of the auspicious day celebrating comics and their creators, I’ll be digging into the history of comic books: the Platinum and Golden Ages of Comics, which includes the creation of the first “comic book” and comic’s rise in popularity.
The Platinum Age of Comics is thought to span from 1897-1938, but first, let’s go back to the late 18th and early 19th centuries. You might remember one of the first political cartoons from Benjamin Franklin (thanks Mr. Monley!), which depicted a snake cut up into different parts and the words “JOIN, or DIE.” It first appeared in Franklin’s Pennsylvania Gazette and was created to unite the American colonies against the French and their Native allies at the beginning of the French and Indian Wars. Cartoons continued to play an important role in English and American society, especially as a way to poke fun at the government and satirize what was going on at the time. For example, Thomas Nast, an influential cartoonist during 1870s New York, played a major role in bringing down “Boss” Tweed and his cronies thanks to a series of cartoons that were critical of Tweed.

“What are You Laughing at? To the Victor Belong the Spoils”/Image via Wikimedia Commons, Harris Brisbane Dick Fund, 1928
Needless to say, cartoonists played a pretty important role in society and people ate it up. Eventually, these individual cartoons that appeared in newspapers and periodicals started to appear in what could be called “cartoon books”: collections of cartoon reprints and later, actual bound books that featured original cartoon artwork.
The first “comic book” is allegedly The Yellow Kid in McFadden’s Flats, but only because it had the phrase “comic book” on its back cover. It was published in 1897 and featured black and white reprints of popular newspaper comic strips (very similar to many books that are a compilation of popular comic strips, such as the beloved Calvin and Hobbes). The Yellow Kid in McFadden’s Flats was quite successful and produced several more comic strip compilation books, including reprints of The Katzenjammer Kids, Happy Hooligan, Buster Brown, and Mutt & Jeff.

Mutt & Jeff “comic book”/Image via Flickr, Smithsonian Institution Libraries
In 1922, another “comic book” called Comics Monthly was published, although like The Yellow Kid in McFadden’s Flats, it was more reprints of daily newspaper comic strips. Eleven years later, a publication titled Funnies On Parade became the first color comic book printed in a 6-5/8″ x 10-1/4″ size.
Then in 1935 things got really exciting! A newly formed publishing company called National Allied Publications released a comic magazine called New Fun #1. It was the company’s first comic book that most closely resembles the comic books of today and it contained completely original material as well as ads. New Fun #1 was a huge success and they began releasing a magazine monthly. By the sixth issue, new writers Jerry Siegel and Joe Shuster were brought on. In March 1937, National Allied Publications released a new comic book called Detective Comics, which became a national sensation and introduced readers to the Batman character. The founder of National Allied Publications, Malcolm Wheeler-Nicholson, decided to form Detective Comics, Inc along with Jack S. Liebowitz who was his accountant. While most people haven’t heard of Detective Comics, I can bet that many are familiar with the company’s later iteration: DC Comics. Siegel and Shuster both worked on Detective Comics and introduced their character called Slam Bradley, who planted the seed for the creation of one of the most famous comic book superheroes ever: Superman.
Most people agree that the Golden Age of Comics started with the introduction of the Superman character in 1938’s Action Comics #1 (which is now worth $3.25 million!). As mentioned before, Batman premiered less than a year later in Detective Comics #27. The Golden Age lasted until the mid-1950s and introduced comic readers to some of the most popular characters to this day: the aforementioned Man of Steel and Caped Crusader, but also Wonder Woman, Captain America, Flash, Green Lantern, and Captain Marvel aka Shazam. In 1939, Marvel Comic’s predecessor, Timely Comics, released Marvel Comics #1 which included the Human Torch, Angel, and Prince Namor the Sub-Mariner. 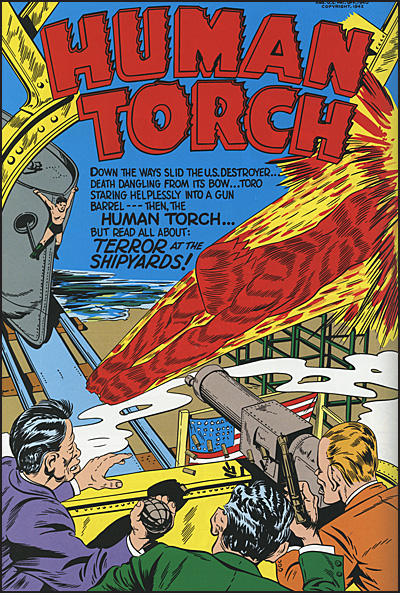 Image via Marvel Comics
Set against the backdrop of World War II, comic books did exceedingly well because they were cheap, easy to transport, and offered inspirational patriotic stories of good defeating evil. In the 1940s, comic books often sold in the millions every month. Captain America was especially popular with his stars and stripes and his mission to defeat the Nazis.
While superheroes were definitely some of the best-selling comic books, other genres also appeared during the Golden Age of Comics. Horror and crime did well, especially a masked detective called The Spirit. Western and sci-fi comic books, while a relatively new way of storytelling, also piqued the interest of readers. Young adults books weren’t really a thing in the 1940s, but teen interest comic strips were. A red-headed teen named Archibald Andrews debuted in 1941 and soon teens everywhere were gobbling up the adventures of Archie, Veronica, Betty, and Jughead. Even Walt Disney got in on the comic book action, publishing series featuring Mickey Mouse and Donald Duck adventuring in the jungle and interacting with animals.

Archie Comics #5/Image via Flickr
When World War II ended, the superhero comic books genre started to lose steam, but still maintained a modest fanbase. Things didn’t get better when the US Senate Subcommittee on Juvenile Delinquency was created and they investigated claims that comics influenced youth to engage in illegal behavior. This resulted in the creation of a Comics Code Authority by the Association of Comics Magazine Publishers to approve self-censorship by comic book publishers.
What will happen to the comic book industry? Keep your eyes out for my article on the Silver and Bronze Age of Comics!
Did I miss anything in my write-up on the history of comic books: the Platinum and Golden ages? Let me know in the comments below!
Keilin Huang is a freelance writer that likes the Oxford comma, reading from her neverending pile of books from the library, and Reeses peanut butter cups. She thanks her Dad for introducing her to his Superman comics and probably majored in Journalism because of Lois Lane. Contact her at [email protected]
Marvel Entertainment, LLC the owners of Marvel Comics®, recently licensed Certified Guaranty Company® (CGC®) with rights to create certification labels that will feature some of the most iconic characters of Marvel. Marvel legend characters that […]
Serial Box is a publishing firm that has managed to gain the public’s attention by telling stories in several new ways. The firm is now focusing on telling stories that focus on superheroes with its […]
Certified Guaranty Company, i.e, CGC is a grading company for comics. They announced that Marvel Entertainment LLC has granted it rights to create a lineup of certification labels featuring the most iconic Marvel characters – […]
Comic Years is the go-to source on news, discussion, and community for comics, movies, gaming , anime and TV!
Sign up to our newsletter and receive weekly up-to-date news & monthly amazing giveaways!*