Big spoilers ahead, but before that drops, here’s a look at how Marvel Comics has been treating Wanda Maximoff, the Scarlet Witch, of late. First an X-Men villain, then an Avenger, then a robot’s wife and mother to illusionary kids, then an insane destroyer of reality (two or three times), then an eraser of almost all mutant powers, and now a schoolteacher. In the last few decades, the Scarlet Witch she’s generally been portrayed as someone whose power got too much for her and sent her into madness. 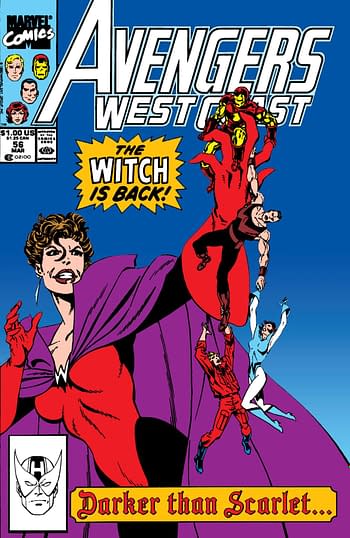 There are very familiar tropes regarding “hysterical” women, women who have more power than they can handle. The use of the word “hysteria” comes from the Greek for “uterus” and Hippocrates’ belief that madness was caused by the uterus moving around the body. This kind of trope is not uncommon for superhero comics, though Dark Phoenix is the more famous example. It was also mirrored in the TV series WandaVision, which saw Wanda Maximoff cruelly enslave a whole town into becoming helpless puppets of her own mental breakdown. Though at least she was present in the narrative, while in the House Of M rewritten reality, she remained unconscious the whole time, after using the phrase “No More Mutants.” In the Marvel comic books, it was also revealed that she was not, as she had thought, the daughter of Magneto. And she wasn’t even a mutant, but a product of the High Evolutionary. She had her history changed back when Marvel and Disney were at odds with Fox Studios over who owned the movie rights to the character. To emphasis the point, Marvel made her and her brother no longer mutants in the comics and no longer the children of Magneto, but results of experiments by The High Evolutionary. That stayed the case even when Disney bought Fox. And so, in the X-Men comics, she was given a new name in the X-Men comic amongst the inhabitants of the mutant island of Krakoa.
“The Pretender.” By her once-father Magneto in SWORD, but also by pretty much anyone else on the island. And the kids of Krakoa being taught her history by Adam X in X-Men. They even have call-and-response learned.
No longer a mutant, no longer the daughter of Magneto, and even though she removed mutant powers rather than kill mutants, she has been seen as the greatest genocidal force of mutants in the Marvel Universe.
Even more so than the Sentinels, who murdered an entire mutant nation. At least Wanda tried to bring all the Genoshans back. 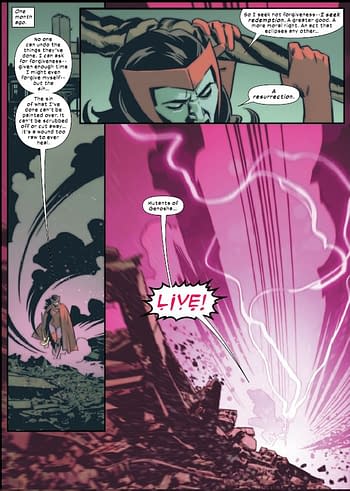 Not that this went well. As the character gained prominence in Avengers: Age Of Ultron, Avengers: Infinity War, and Avengers: Endgame, she span off her own TV series, Wandavision, and an appearance in Doctor Strange: Multiverse Of Madness. But during this time, her own comic book series was cancelled. She appeared in Avengers but became a pariah in the Marvel Universe. 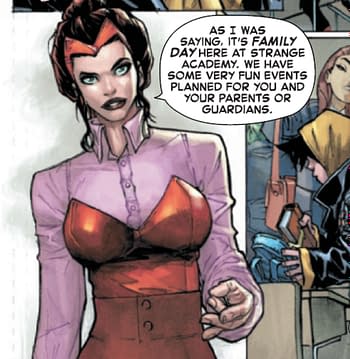 As WandaVision was airing, her only appearance was in a panel in Strange Academy or referred to as a genocidal enemy number one of Krakoa and a diplomatic issue with Earth and the Skrull/Kree Alliance as she is the Emperor’s mother-in-law.

Placed almost top of their War Criminals list, only second to Bolivar Trask, inventor of the Sentinels that massacred Genosha. However, Wanda removed mutant powers rather than took lives. 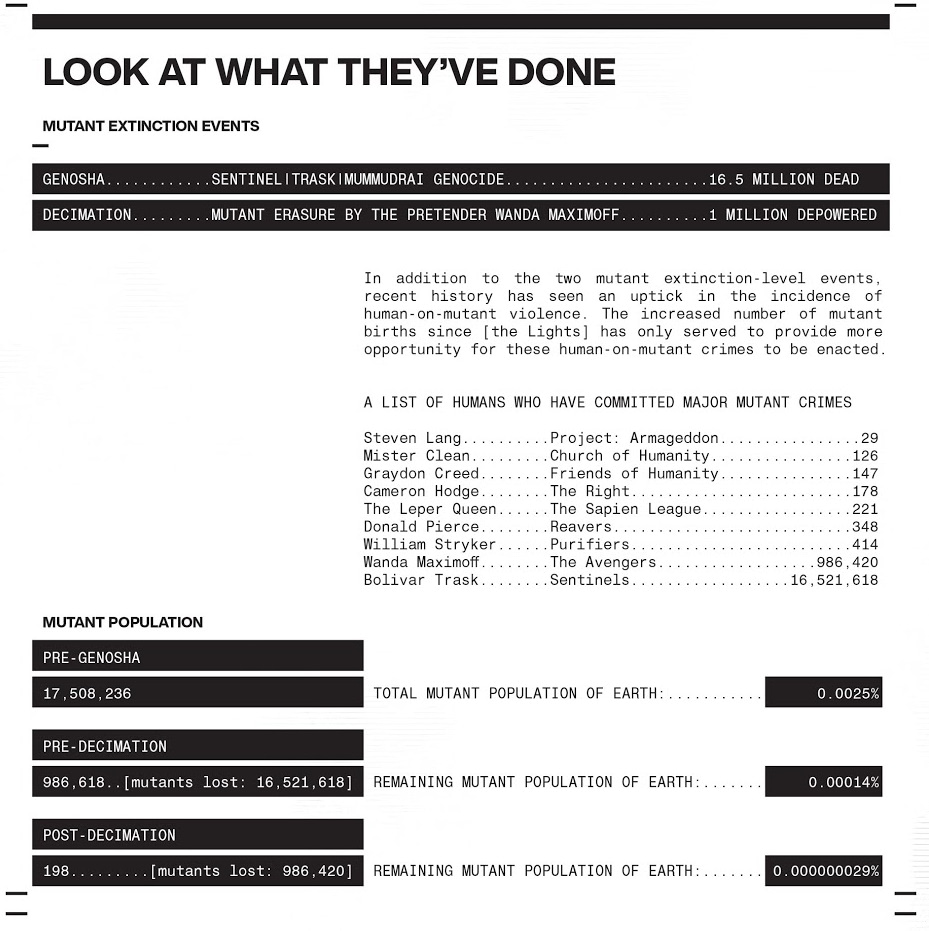 She was meant to be a lead in the new Darkhold series last summer, which was delayed and is now rescheduled for September this year. But what kind of Scarlet Witch are we going to get? The Way Of X, by Si Spurrier, teased that they would be dealing with the Scarlet Witch issue. 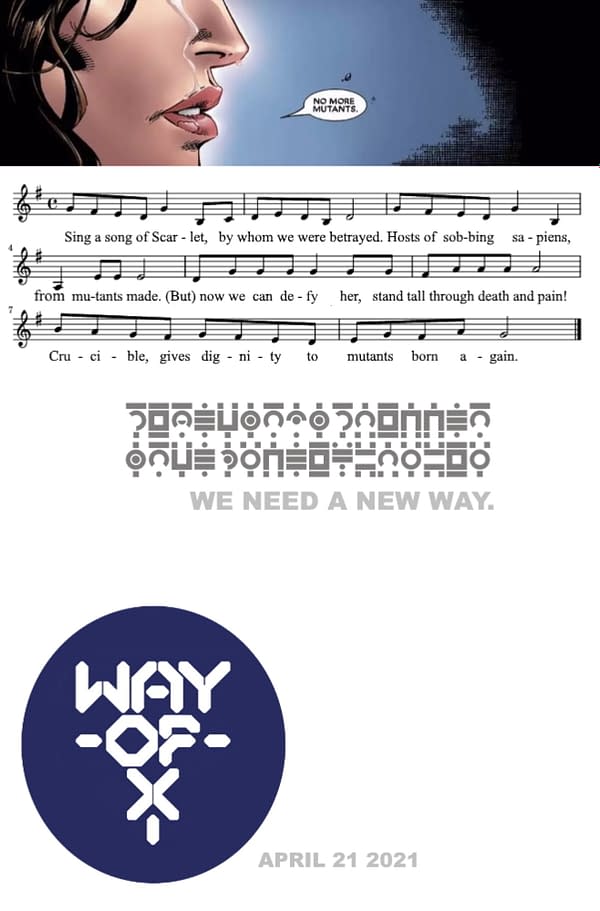 As Way Of X #3 gives the “No More Mutants” event created by Scarlet Witch a new name. 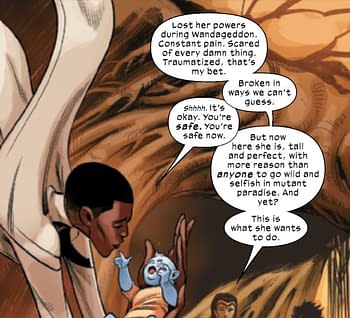 “Wandageddon.” But those paying close attention would see a couple dancing the morning after the Hellfire Gala as Nightcrawler tries to sleep off the night before.

Because at the end of SWORD #6, Magneto got a visitor on Krakoa. 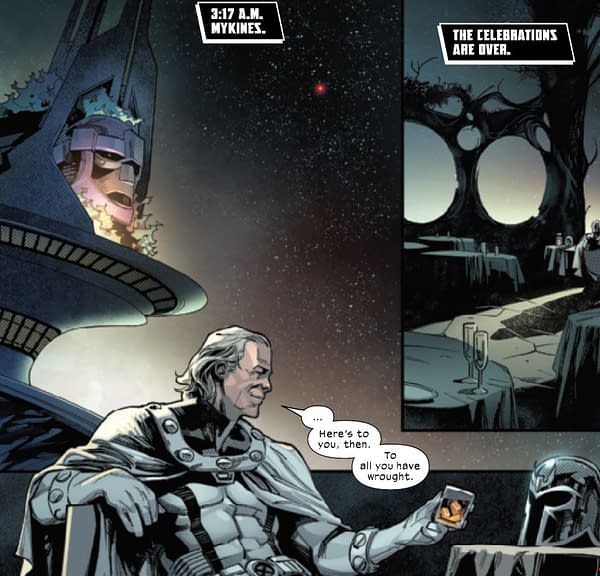 Someone who has not yet visited, or even been seen, in the Krakoan X-Men books, aside from in Genosha. 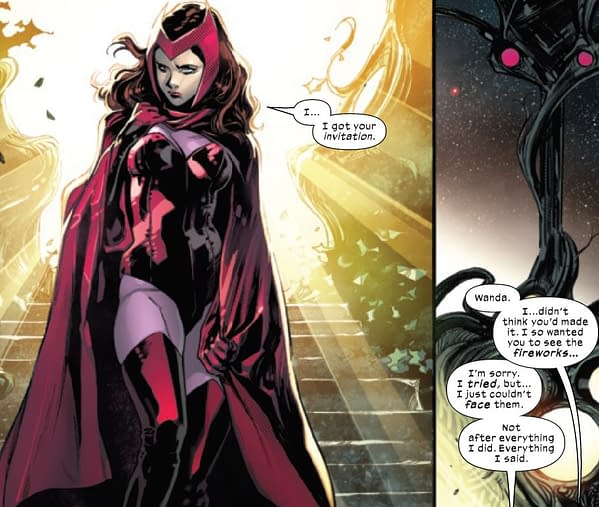 With much to be said, learned – and danced. Earlier this week, Bleeding Cool got the word that X-Factor #10, published today  by Marvel Comics, may turn out to be a collectible comic. Ending the Hellfire Gala storyline that has been running across all Marvel’s X-Men comic books. And that it would make a major change and get all sorts of publicity. Which naturally will need lots of big spoiler imagery.

We also speculated as to what it may be, looking at what we said on May 10th about the upcoming Trial Of Magneto series, which follows on from X-Factor. Six weeks ago, we wondered what Magneto would go on trial for? Currently, the Marvel X-Men comic books take place on the mutant island of Krakoa, where almost all mutants on Earth have relocated. 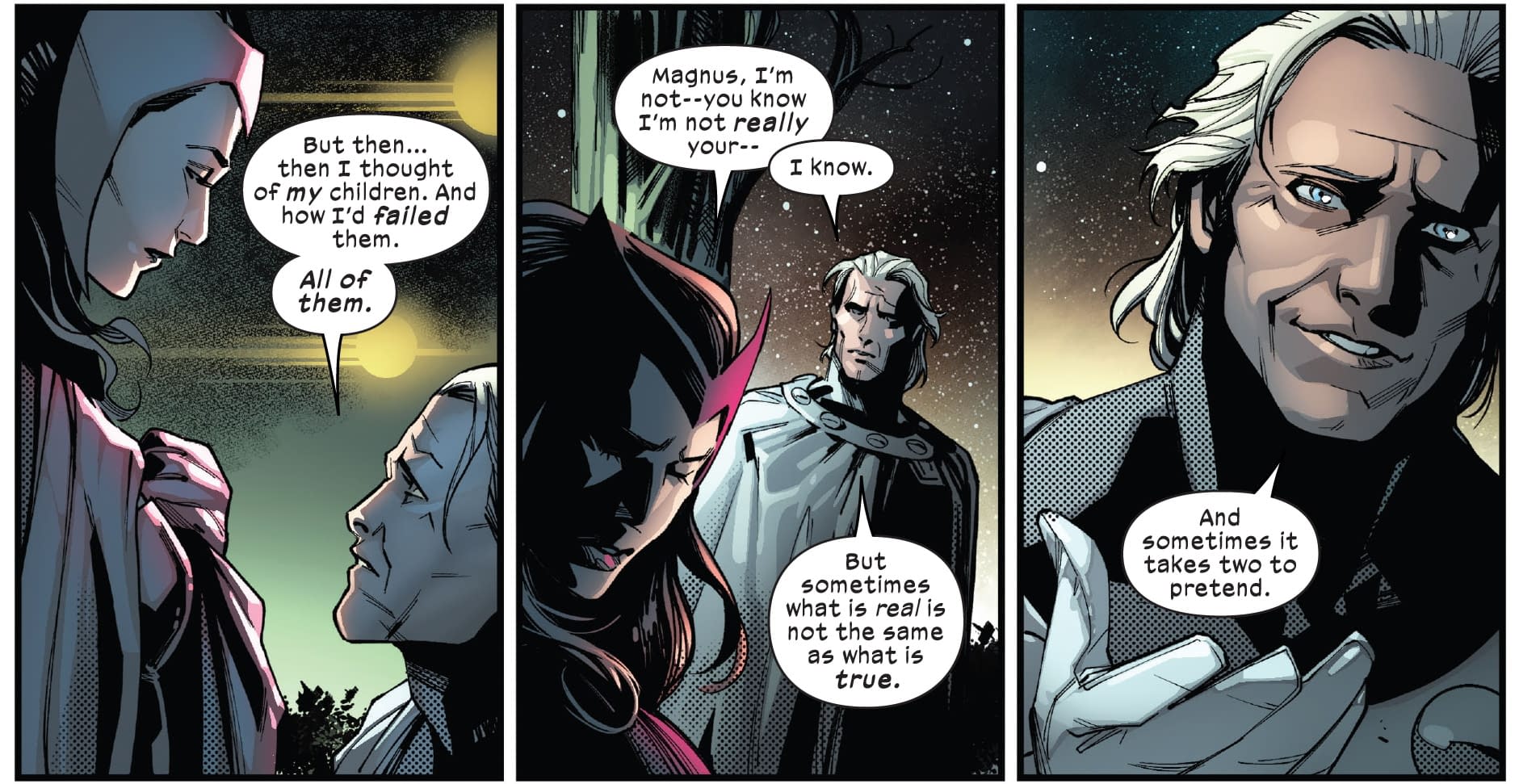 A mutant isolationist idyll, it also resurrects mutants who die, thanks to the work of The Five, saving mutant memories and souls and growing them new bodies. But this is only done for mutants. As a result, the First Law Of Krakoa is “Murder No Man.” As humanity cannot be resurrected as mutantity is. When Marvel announced a Trial Of Magneto series, we thought this might be what he would be tried for and asked, “Will it be for murder – the killing of a human? And could that human – no longer a mutant – be his estranged not-a-daughter-anymore Scarlet Witch, Wanda Maximoff?” 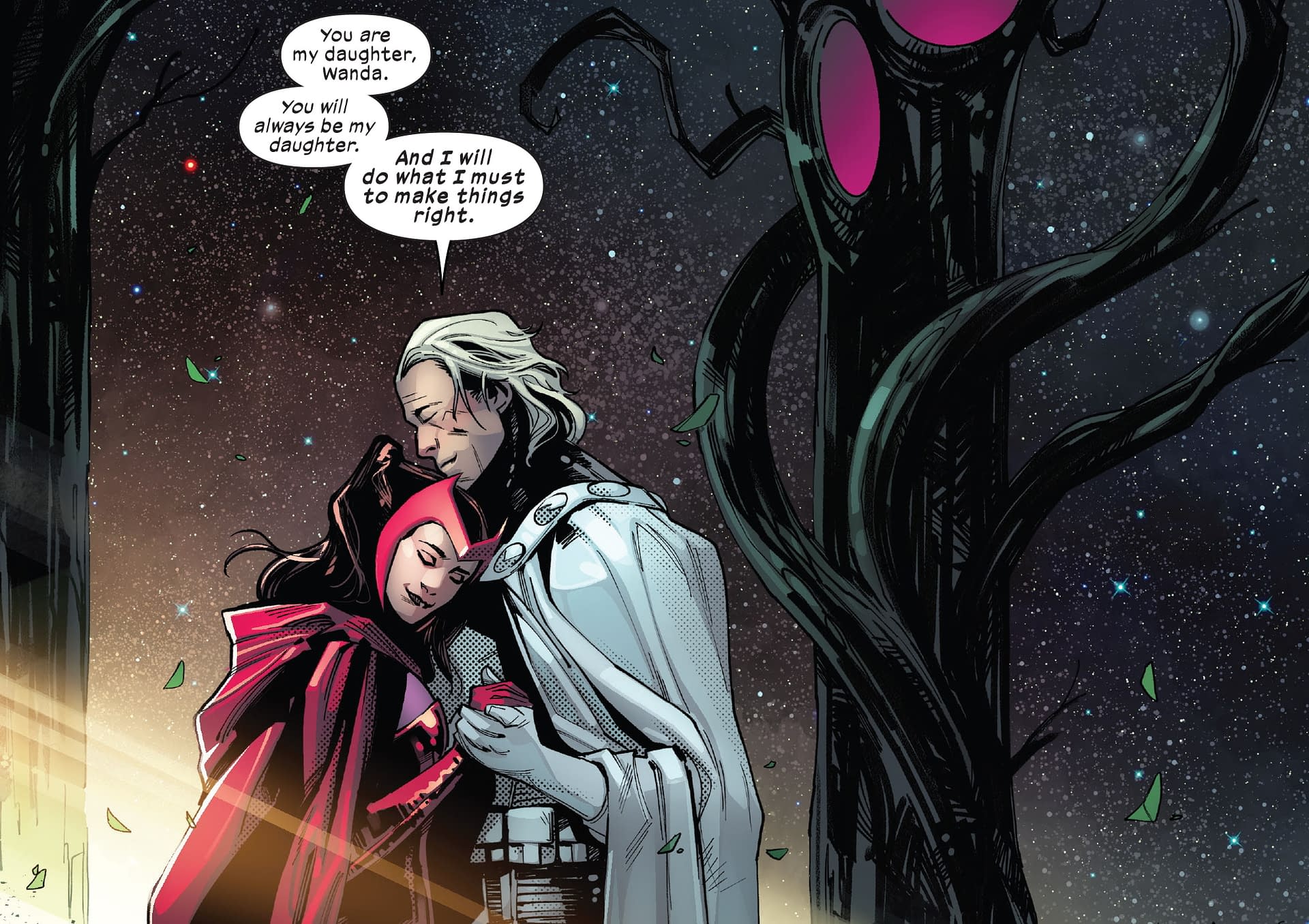 And today, in X-Factor #10, the final issue of the Hellfire Gala and booming on eBay, we see the arrival on Krakoa of Tommy, Wanda Maximoff’s other son. 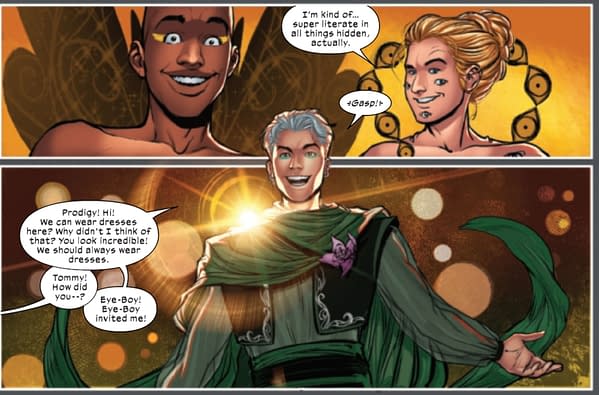 But his timing was terrible. Invited by Eye-Boy, the mutant whose all-seeing powers have been expanding somewhat of late, just as he arrives, something is noted in the bushes. 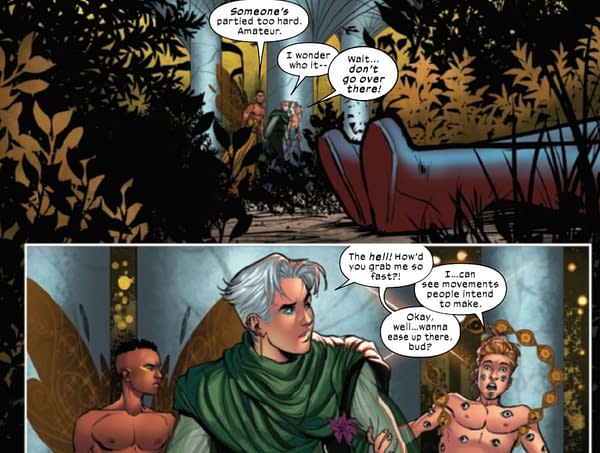 Tommy, every the speedy superhero, wants to help. But Eye-Boy has seen is what is about to happen and tries his best to stop the inevitable. 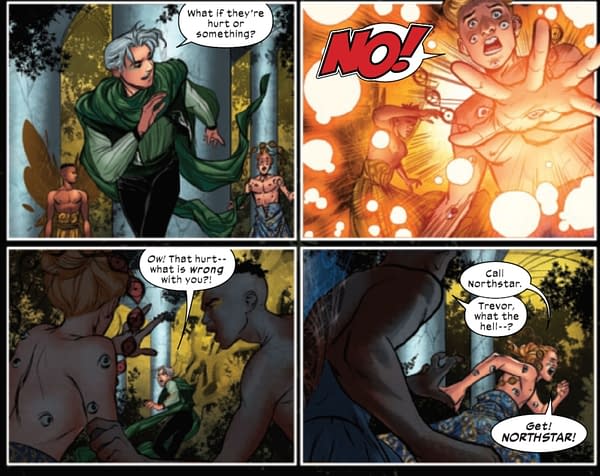 And the inevitable occurs. Tommy sees the prone body on the floor and reacts as one might expect. 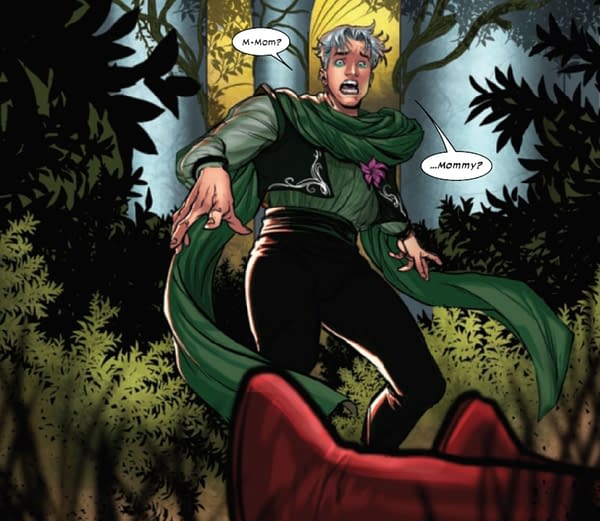 The death of Wanda Maximoff, the Scarlet Witch, by hands unknown. 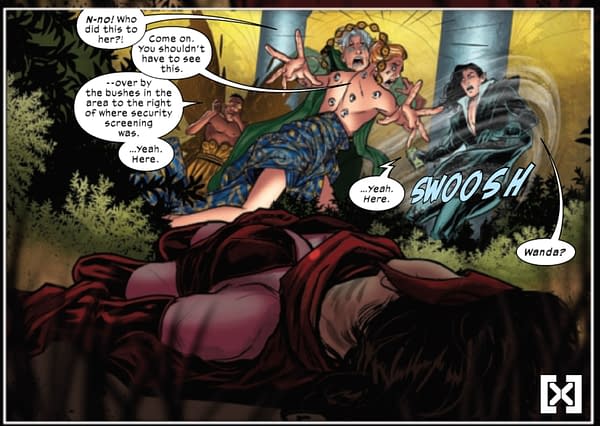 Although some have some suspicions, of course, and if Nightcrawler was conscious, he might recall seeing a pair dancing. 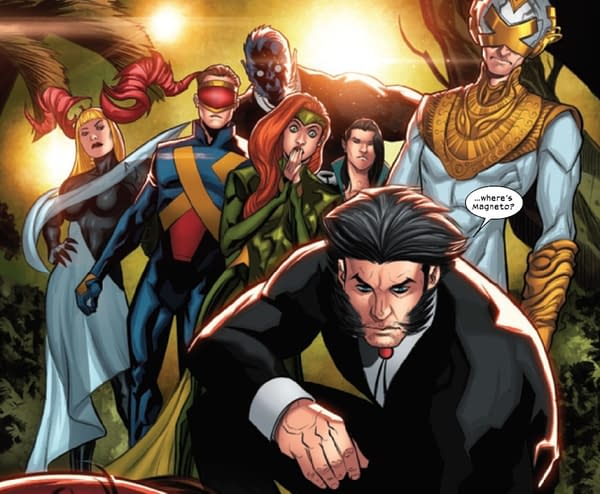 Marvel Comics has been teasing The Trial Of Magneto series for some time. 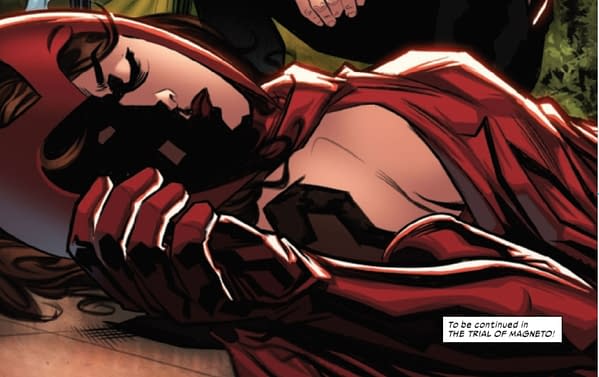 And Bleeding Cool speculation from back in May seems to have come to fruition. Marvel has killed off the Scarlet Witch, and Magneto is the prime suspect. Given the success of the WandaVision TV series and the expected prominence of the Scarlet Witch in the upcoming Doctor Strange: The Multiverse Of Madness, it’s a bold move by Marvel. And the status of the upcoming Darkhold series is also in question. While the mutants of Krakoa are “backed up” and can be resurrected by Cerebro and The Five, non-mutants cannot be. And Wanda Maximoff is no longer a mutant.
But we might also look to this week’s X-Men Monday column at AIPT Comics, where X-Men editor Jordan D White answers whether Scarlet Witch could use a Krakoan transport gate without being a mutant, saying,,, “did she walk through a gate? Yeah, maybe she did. Does that mean she’s a mutant? Well, you’d think the answer was “Yes.” Except, as we know, she was thought to be a mutant for many, many, many years. And she was thought to be a mutant by people who have the technology developed specifically for identifying mutants. So while she is not a mutant, whatever she is, whatever was done to her, was enough to fool Cerebro, apparently.”
So if she was disguised enough as a mutant to fool Cerebro despite not being a mutant, does that mean she was also backed up by Cerebro before her death? And could she be brought back to life just like the other mutants? Could she even testify in her own murder trial? Upcoming solicitations also state that “there is something wrong with the body”… X-Factor #10 is published by Marvel Comics today, the 30th of June. 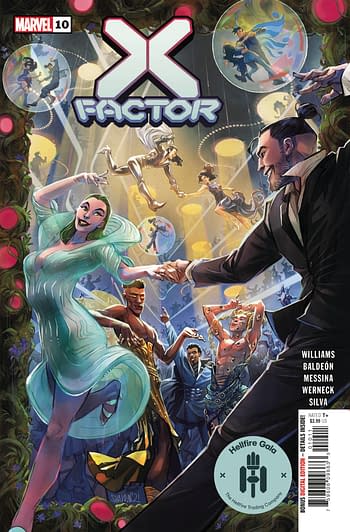 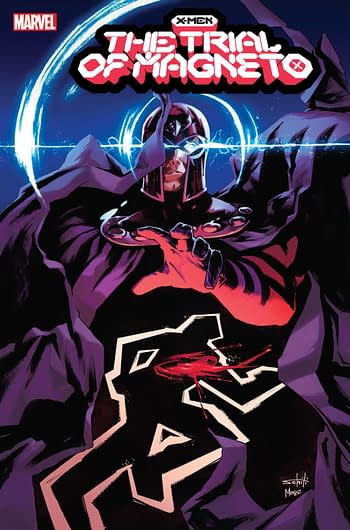 X-MEN TRIAL OF MAGNETO #1 (OF 5)
MARVEL COMICS
JUN210554
(W) Leah Williams (A) Lucas Werneck (CA) Valerio Schiti
THE STORY THAT WILL SHAKE KRAKOA TO ITS CORE!
A horrific murder. A shocking revelation. A trial that will divide the new mutant nation. Leah Williams and Valerio Schiti bring you a new epic that threatens the Reign of X and will upend the world of mutants. The truth is hidden, the danger is far from over, and the trial has begun
Rated T+In Shops: Aug 18, 2021 SRP: $4.99 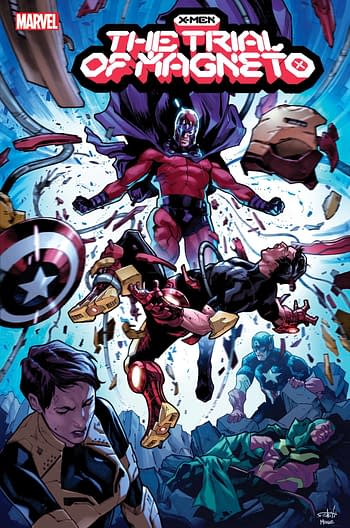 X-MEN TRIAL OF MAGNETO #2 (OF 5)
MARVEL COMICS
JUL210615
(W) Leah Williams (A) Lucas Werneck (CA) Valerio Schiti
HABEAS CORPSES! Heroes of the Marvel Universe came to Krakoa for a memorial. Now they’ve got a fight. Magneto pushes Krakoa and the Council to the brink! Also… there’s something wrong with the body… Rated T+ In Shops: Sep 15, 2021 SRP: $3.99 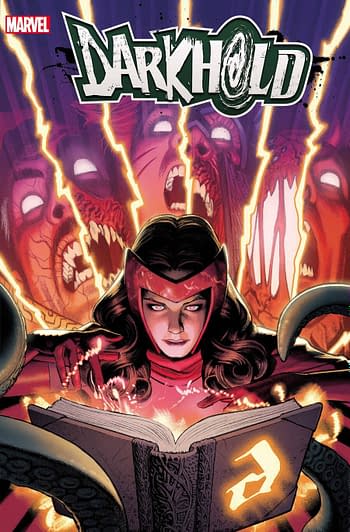 DARKHOLD ALPHA #1 (RES)
MARVEL COMICS
JUL210548
(W) Steve Orlando (A) Cian Tormey (CA) Greg Smallwood
ENTER THE PAGES OF THE DARKHOLD – AND LOSE YOUR MIND IN MIGHTY MARVEL FASHION!
Critically acclaimed writer Steve Orlando joins forces with extraordinary artist Cian Tormey for a story that will delight and terrify! For hundreds of years, scholars and heroes alike have searched for the complete text of the Darkhold – a.k.a. the Book of the Damned, written by the elder god Chthon. Now one of the greatest sorcerers in the Multiverse has found it – and Chthon has found him. To save them all, the Scarlet Witch must gather the world’s greatest heroes…and unleash their inner darkness. Witness the Marvel Universe’s descent into chaos! Rated T+In Shops: Sep 29, 2021 SRP: $4.99
Enjoyed this? Please share on social media!