Home » COMICS » Who Is More Evil Than Thanos – Meet The Newest Eternal, Uranos the Undying
Kieron Gillen returned to Marvel Comics like a snowball turning into an avalanche. He took the reins of the Eternals franchise and brought them to new depths. For instance, Thanos is now their leader. He’ll also be joining the X-office with Immortal X-Men. Most of all, he’s finally writing a Marvel event: Judgement Day, which will see the Eternals, Avengers, and X-Men all go to war. But before that, Gillen will shake the Eternals’ foundation once more. Eternals: The Heretic introduces Uranos the Undying, a far more evil character than Thanos. Sounds like fun, right?
As far as ultimate villains, Marvel had Thanos while DC has Darkseid. For DC, Darkseid is still the big evil, but Thanos’ time is up for Marvel. As it turns out, killing half the universe isn’t very impressive. At least, not to Uranos the Undying, who, in one page, makes the most evil act Thanos ever committed sound like little more than your everyday bullying. Observe: 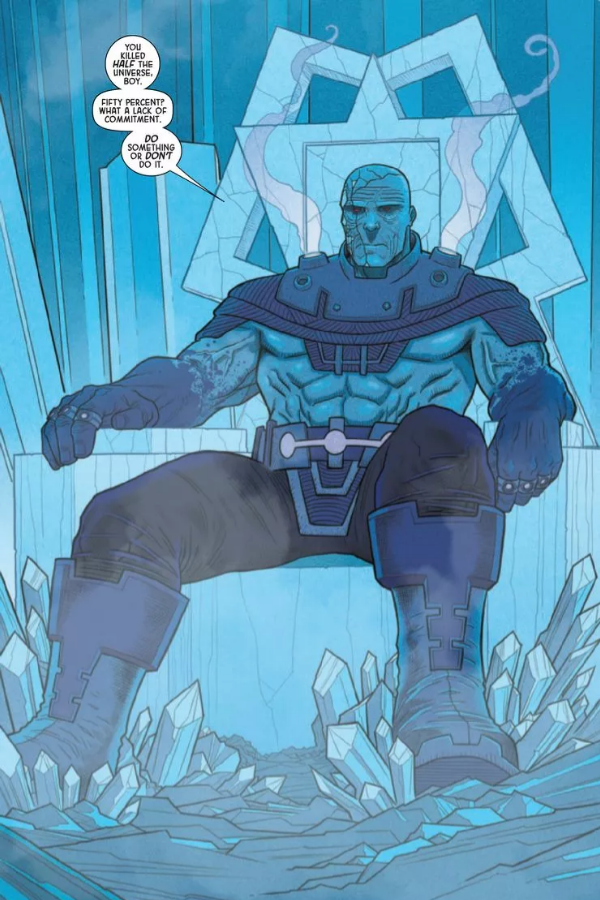 (Image: Marvel Comics)
However, Uranos is more than just a new(ish) Eternal character. He’s the oldest. In fact, the recap and credit page of The Heretic calls him “Thanos’ Grandfather.” And he is not impressed by his grandson’s exploits. At first, Uranos was Thanos’ more evil great uncle. Or, as Gillen described:
Uranos the Undying, Omnigenocidal Great Uncle, the rotting monstrous tree which Thanos’ apple barely fell from, proof that perhaps this capacity of horror does skip a generation.
It looks like the editors decided to upgrade him to grandpa, which actually coincides much better with the Greek counterpart: Uranus. 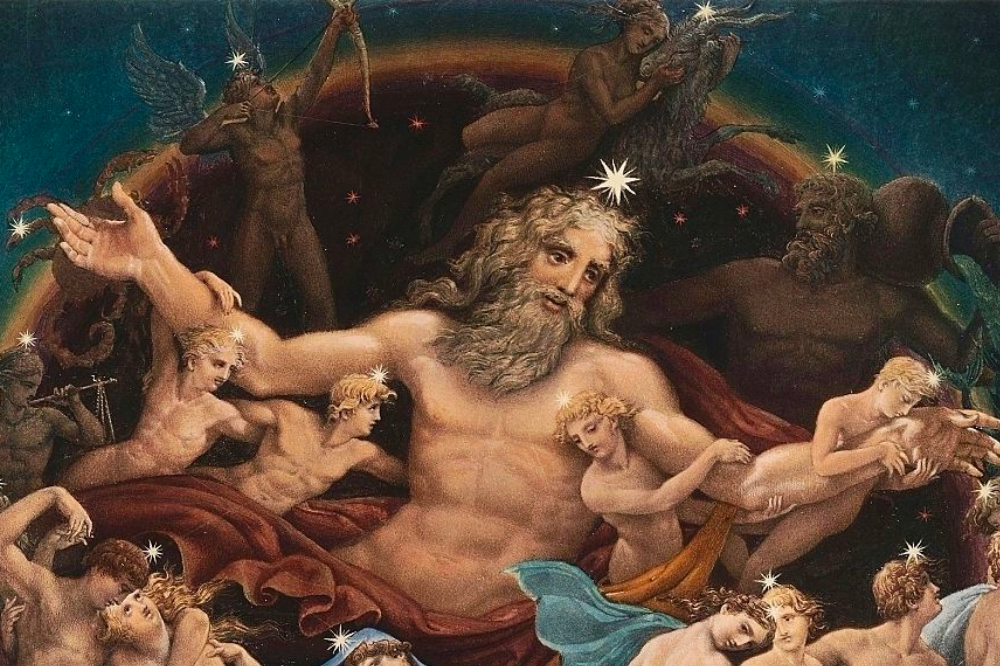 (Image: target=”_blank” rel=”noopener”>Wikimedia Commons)
The Eternals are deviations (no pun intended) of Greek gods. Thena is Athena, Ikaris is Icarus. And so on. Uranos is, of course, Uranus, one of the oldest Greek gods. How old? He is the father of the Titans, who then gave birth to the gods we are more familiar with. Adapting this to the Eternals makes him Mentor’s father and thus Thanos and Eros’ evil grandfather. However, what’s interesting to note is that Uranus’ wife/mother (ewe) is Gaia, the mother of the Earth. Does this mean there is an Eternal version of Gaia, or is it the same Gaia?
But if the same mythos follows, there might be a good reason why Uranos is more evil than Thanos: someone took his balls. As Hesiod tells us in the Theogony:
<Gaia> hid young Cronos in an ambush and placed in his hands
The jagged sickle. Then she went over the whole plan with him.
And now on came great , bringing Night with him.
And, longing for love, he settled himself all over Earth.
From his dark hiding-place, the son reached out
With his left hand, while with his right he swung
The fiendishly long and jagged sickle, pruning the genitals
Of his own father with one swoop and tossing them
Behind him, where they fell to no small effect.
What was “no small effect?” Well, Uranus’s severed testicles are where the giants, tree nymphs, sirens, and – shockingly – the god Aphrodite come from. 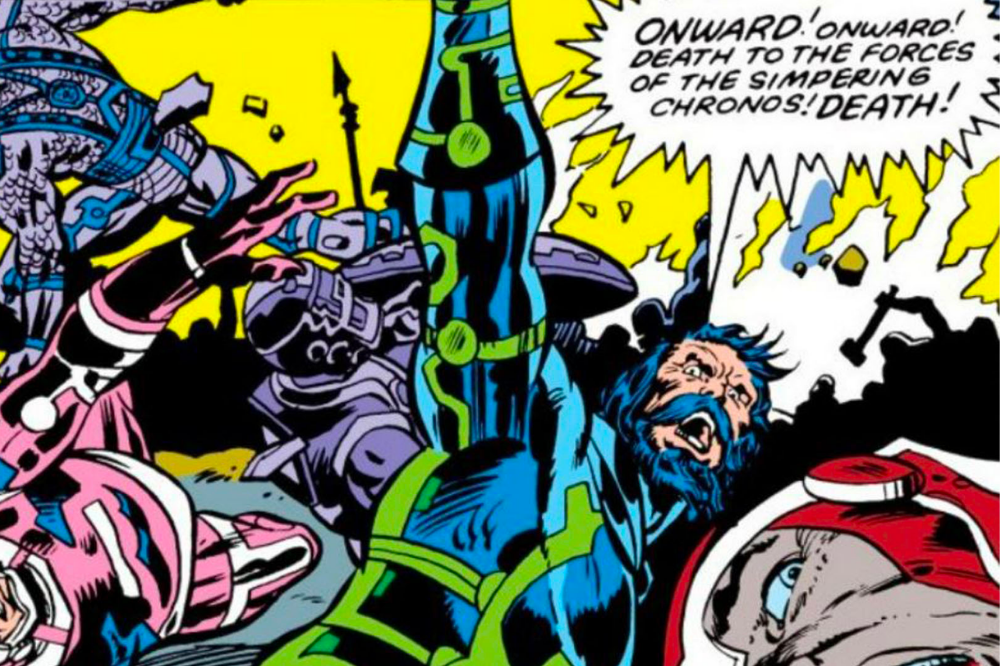 (Image: Marvel Comics)
A version of Uranos does appear in a few of the early Eternals comics. However, as Gillen noted, Uranos is “clearly hugely important to their mythology, but with only a handful of pages he’s even on.” This is great for a creator, sometimes. The character is established but almost with a carte blanche for development. What really tells us that Uranos the Undying will be more evil than Thanos is how Gillen thought of the character:
“In my earliest notes, I described him as taking the place that Morgoth does in Middle-Earth’s mythology.”
If you’re a fan of The Silmarillion or if the Rings of Power trailer pumped you up for epic badassery, this statement should make Eternals: The Heretic the first comic you read when you wake up on Wednesday.
Oh! If you were wondering where Uranus’s family jewels landed, book a trip to Sicily. They’re somewhere between Trapani and Messina, as legend has it.
(Featured Image: Marvel Comics)
Roman Colombo finished his MFA in 2010 and now teaches writing and graphic novel literature at various Philadelphia colleges. His first novel, Trading Saints for Sinners, was published in 2014. He’s currently working on his next novel and hoping to find an agent soon.
Marvel Entertainment, LLC the owners of Marvel Comics®, recently licensed Certified Guaranty Company® (CGC®) with rights to create certification labels that will feature some of the most iconic characters of Marvel. Marvel legend characters that […]
Serial Box is a publishing firm that has managed to gain the public’s attention by telling stories in several new ways. The firm is now focusing on telling stories that focus on superheroes with its […]
Certified Guaranty Company, i.e, CGC is a grading company for comics. They announced that Marvel Entertainment LLC has granted it rights to create a lineup of certification labels featuring the most iconic Marvel characters – […]
Comic Years is the go-to source on news, discussion, and community for comics, movies, gaming , anime and TV!
Sign up to our newsletter and receive weekly up-to-date news & monthly amazing giveaways!*

Collectible values continue to skyrocket: Are you sitting on the next big seller? – Jacksonville Journal-Courier