Home » COMICS » Marvel » Who Is Thena? A Look At Marvel Comics’ Eternals Characters
When the Eternals movie was first announced at SDCC 2019 for the MCU’s Phase 4, people had questions. Who the heck were these Eternals? How will they fit into the MCU? Well, now we know (kind of). Marvel Studios released the final Eternals trailer and fans got a clearer picture of what these beautiful superheroes will be doing in the MCU. We wrote about the history of the Eternals, but basically, they’re the creation of divine beings, the Celestials (Ego, Peter Quill’s father, was one of these beings). The Celestials created early humanoids as a way to kickstart human evolution, thus creating the Eternals (the gorgeous, good-hearted ones) and the Deviants (the ugly, evil ones). The former was tasked with protecting Earth (and later, humankind) from the wicked plans of the Deviants. While we’ve gotten a glimpse of these new characters, I’m going to take a closer look at each of the 10 new superheroes. In this first post of the series, I’m asking: who is Thena?
Thena, who is played by Angelina Jolie, is a bit of an anomaly when compared to the other Eternals because she’s formed a romantic relationship with a Deviant named Kro and had twins with him. Because of this she’s a bit of an outcast, although she’s close to fellow Eternal, Gilgamesh.
Like the other Eternals, Thena is endowed with super strength and durability. She can fly, teleport, and change her appearance and the appearance of other objects. She is extremely intelligent and has been lucky enough to learn from some of the greatest minds throughout history.
Thena is also a skilled hand-to-hand combatant, especially unarmed combat and fighting with ancient and Eternal high-tech weapons. She wears armor of unknown composition and carries a bow that fires arrows that release “cold energy” (not quite sure what this means, but it sounds painful). She also carries a spear that surrounds victims with a ring of intense heat and light or shoots them with anti-gravitons. 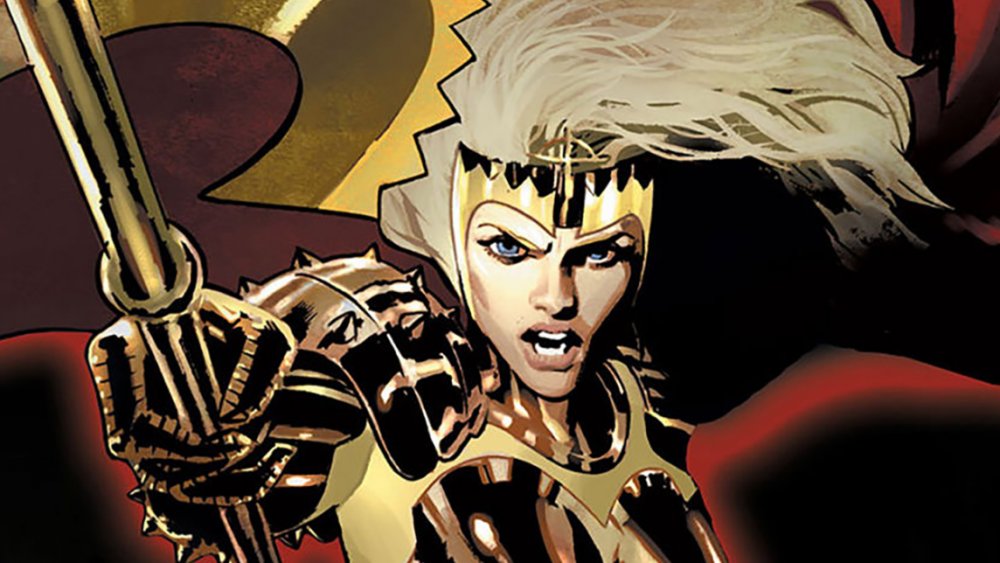 Image via Marvel Comics
Thena is also one of the original Eternals created by Jack Kirby in the 1970s, and like the others, has roots in Greek mythology. She was born in Olympia and was often mistaken for Athena or Minerva (the Roman name). As mentioned before, she became the lover of Kro and they consummated their love during the Vietnam War, which resulted in the birth of their twin children, Donald and Deborah. She later rejected Kro when he attacked New York City and declared herself forever an Eternal.
In the more recent version of the Eternals comic, Thena is married to Thomas Eliot and they have a son named Joey. She’s a researcher at Stark Enterprises and she has no powers; however, after several traumatic events, she gets her powers (as well as her memories) back.
Are you excited to learn more about Angelina Jolie’s Thena? Let us know in the comments below!
Featured image via Marvel Studios
Keilin Huang is a freelance writer that likes the Oxford comma, reading from her neverending pile of books from the library, and Reeses peanut butter cups. She thanks her Dad for introducing her to his Superman comics and probably majored in Journalism because of Lois Lane. Contact her at [email protected]
Marvel Entertainment, LLC the owners of Marvel Comics®, recently licensed Certified Guaranty Company® (CGC®) with rights to create certification labels that will feature some of the most iconic characters of Marvel. Marvel legend characters that […]
Recently, 20th Century Fox released another X-Men trailer. Dark Phoenix features Jesica Chastain. She acts as a mysterious foe. The trailer debuted in The Tonight Show with Jimmy Fallon. Many X men phoenix fans are […]
Serial Box is a publishing firm that has managed to gain the public’s attention by telling stories in several new ways. The firm is now focusing on telling stories that focus on superheroes with its […]
Comic Years is the go-to source on news, discussion, and community for comics, movies, gaming , anime and TV!
Sign up to our newsletter and receive weekly up-to-date news & monthly amazing giveaways!*